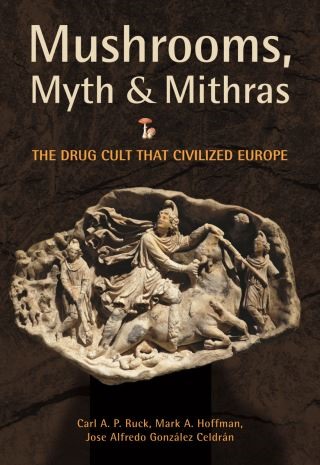 The Drug Cult That Civilized Europe

Since the publication of Daniel Pinchbeck's "Breaking Open the Head" there has been a resurgence of interest in psychedelics in general and mushrooms in particular. Professor Carl Ruck has been researching and writing about mushrooms and culture for decades, and is one of the preeminent scholars on classic mythology and mushrooms. The many people who follow news and developments in the psychedelic community will embrace “Mushrooms, Myth, and Mithras” as a classic and will be fascinated by it's evidence that mushroom use was not only a practice of the elite of ancient Rome, but that the symbols emerging from the experience and rituals have had a profound impact on the emergence of European culture. Mark Hoffman, one of the younger co-authors of the book, is publisher of “Entheos, The Journal of Psychedelic Spirituality,” and is very plugged in to the community who will be interested in this book. Carl Ruck is best known for his seminal work with Gordon Wasson & Albert Hofmann on mushrooms and other plants used during shamanistic rituals for healing and spiritual experience. (These drugs are known as entheogens).

Carl Ruck is best known for his work in mythology and religion on the sacred role of entheogens as used in religious or shamanistic rituals. His focus has been on the use of entheogens in classical western culture, as well as their historical influence on modern western religions. He currently teaches at Boston University. Mark Alwin Hoffman, with degrees in Religious Studies and Philosophy from San Diego State University and based in Taos, New Mexico, is editor of Entheos: The Journal of Psychedelic Spirituality. He has written on shamanism, ancient religions, early Christianity and the role of visionary sacraments in western mystery tradition. Jose Alfredo González Celdrán is a professor of ancient Greek based in Murcía, Spain, and is the author of Las Puertas de Moeris, an historical novel, and Homres, Dioses, y Hongos (Men, Gods, and Mushrooms) on the role of psychoactive mushrooms in myth and religion, as well as essays in collaboration with an archaeologist on entheogens.